Well another summer is disappeared into the books and our scouts are back in school.  So what does this mean? It means we need to continue with the same energy we had at camp and carry it through the 2017-18 season.  So all of the parents are aware camp was outstanding and I am extremely proud of what the boys accomplished.

The younger scouts of Tyler, Jack H., Dan and Sam P. worked very hard in the Curlews program for two day refining their scout skills which was highlighted with a hike into the wilderness followed by cooking, eating, building a shelter and sleeping under the stars.  These scouts were able to knock off several requirements in the Tenderfoot, 2nd Class and First Class ranks.

Other highlights included having Ethan, Jack L and Wyatt attain their Brotherhood in the OA along with adult leaders Peter and Patrick.

Each of the boys spent a day on the water earning their Kayaking merit badge and for some that is their first MB so congrats.  They also earned the BSA snorkeling award as well.  While the younger scouts participated in the Curlews the older scouts of Ethan, Wyatt, Jack L and Nat all set out on the Lewis & Calrk expedition to discover the northwest.  Even the the trip was started by two scouts getting stung by sever ground wasps after stepping on thier home, their adventure was rewarded by a hearty porkchop meal on the Biolite grill.

For two days the scouts also spent time at Fire Fox honing in on their metal work skills comleting all but just a couple final requirements for the Metalworking MB.  Additionally the boys won their second straight Travois race award by coming in with the the quickest time over the summer.  The scouts also proved their ability to cook by winning for the third year in a row the Cast Iron Cookoff by taking home the Golden Spatula!  I think we are developing a dynasty.

All in all it was a great week with your scouts and I look forward to an exciting 2017-18 season. 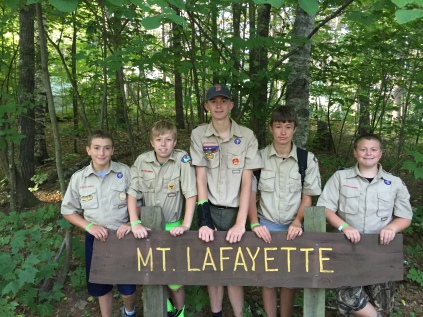